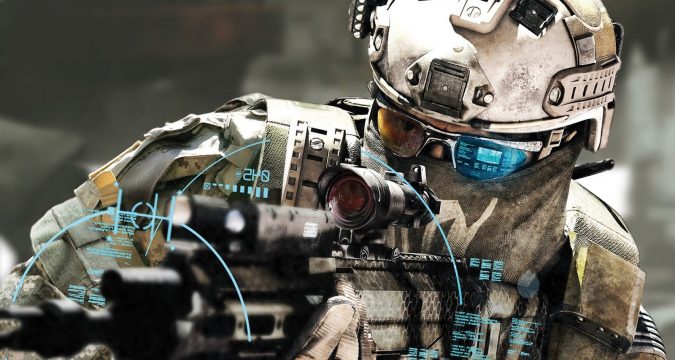 The research laboratory of the US Army, the CCDC ARL, finances research programs supposed to prefigure “the technologies of the future to equip the responders during strategic operations”. He has just revealed the list of his most beautiful technological advances in 2019.

A sniper, accompanied by an overpowered dog-drone, who prints his tank in 3D and whose brain is scrutinized in real-time by the command: here is the soldier of the future according to the research laboratory of the US Army (the US Army CCDC Army Research Laboratory), which has drawn up a list of its 10 best technological advances of 2019.

Projects still in the research stage but which speak volumes about the vision of the war of tomorrow by the American army.

To equip their future robot companions on all fours, the U.S. Army is working on artificial muscles based on plastic, in order to increase their power tenfold.

In particular, the researchers studied the ability of plastic fibers to contract and stretch when they are twisted and wound on themselves.

“These artificial muscles can respond to different stimuli like a biological muscle,” says the team specializing in polymer science.

Terminator is not far away.

and Cancer, 10 early warning signs you should never ignore.

and The Artificial intelligence invites itself into your toilets

may interest you Apple AirPod Pro: Not surprisingly, it’s disposable

and AirPods Pro, Apple Officially confirms. Exclusive all the details

Detect exposure to a toxic agent, monitor the soldier’s state of stress or his level of performance:

researchers are developing autonomous, inexpensive and resistant to the worst environmental conditions to integrate them into soldiers’ equipment or directly on them.

the skin. “We can thus collect in real-time a whole series of data from blood, saliva or sweat, and establish a complete check-up,” predicts the ARL.

The problem with current lithium-ion batteries is that they contain a highly flammable electrolyte.

These batteries represent a great danger for the soldiers who carry them on them.

In collaboration with the University of Maryland, the military has designed batteries with a water-based … electrolyte.

This technology, called an aqueous electrolyte, uses lithium salts that are not sensitive to heat.

“This allows batteries to be stored and used at a much wider temperature range,” says Arthur von Wald Cresce, an army materials engineer.

Hydrogen in tablet to dilute

“Imagine a patrol in operation, out of battery, and with an urgent need to reach its base by radio,” questions Kris Darling, a specialist in army materials.

The solution? “A soldier urinates in a bottle, adds a hydrogen tablet which dissolves and produces pure energy to power the radio.

” Researchers are studying the properties of a nanogalvanized aluminum-based alloy that reacts with any liquid to instantly produce hydrogen on-demand, without a catalyst.

Rather than desperately waiting for spare parts for Army vehicles, it will suffice to print them directly on the spot with a 3D printer.

The researchers used technology originally developed by the Air Force called Powder Bed Fusion, where a laser melts a special metallic powder in a predefined pattern. “This allows you to create parts with complex characteristics that no mold could create, and about 50% stronger than anything available on the market,” says Brandon McWilliams.

Even better than biosensors, the thought detector! The U.S. Army says it has developed a detector capable of “decoding the neural activity of soldiers” by analyzing the electrical waves of the brain.

It would thus be possible to determine a person’s mental state, his response to external stimuli and even where he is looking.

A technology intended for “a better collaboration between humans and artificial intelligence”.

What transforms soldiers into cyborgs.

An intelligence that invents new materials

Super-light alloys that are stronger than steel, catalysts for fuel cells or coatings that make them invisible: almost everything is imaginable in materials science, thanks to the algorithmic system developed by the army and the university by Cornell, christened Crystal.

Communicating discreetly in underground environments or through the walls of a building: this is the objective of the American Army.

One of the research teams is working on robotic mini-antennas capable of self-organizing.

“A robot with a compact low-frequency antenna coordinates with other robots with passive antennas that help focus the electromagnetic field in the desired direction.

The more robots we add, the more concentrated the network becomes, improving its range and reliability, ”explain the researchers.

A material that self-repairs and changes shape

A seal that gives way?

No problem with the new polymer developed by ARL researchers, which self-repairs when damaged or cut.

You just have to make ends meet and it goes back on its own! Even better:

this 3D printable gel changes shape when the temperature is varied.

The army is thus considering “configurable” objects on-demand to meet the demands of its soldiers.

An intelligent robot that adapts to the terrain

Most of the time, robots are programmed to perform a specific task in a specific environment.

Not really the actual conditions under which the soldiers operate.

The army is, therefore, working on artificial intelligence for its robots, in order to adapt their behavior in any situation, including those they have never encountered.

An unsupervised learning mode and much more complex than the classification of cat photos.

and Artificial Intelligence A-Z Learn How To Build An AI

and Satellite Internet: SpaceX will launch its network in 2020

and Levi’s: the new jackets connected Jacquard by Google arrive

Electronic cigarette: the strange disease that strikes the United States

Google Assistant will tell you your next NYC train can arrive